Back to Canada - and TAS

My friend, Victoria, resigned as chair of the Trans Alliance Society of British Cloumbia. She is going through a particularly difficult period in her life, so I can hardly blame her.

There was a delay in electing a new chair - for reasons I won't go in to here. But it meant that the new 'interim' chair wasn't elected until July 27th - the first day of Pride Week in Vancouver! 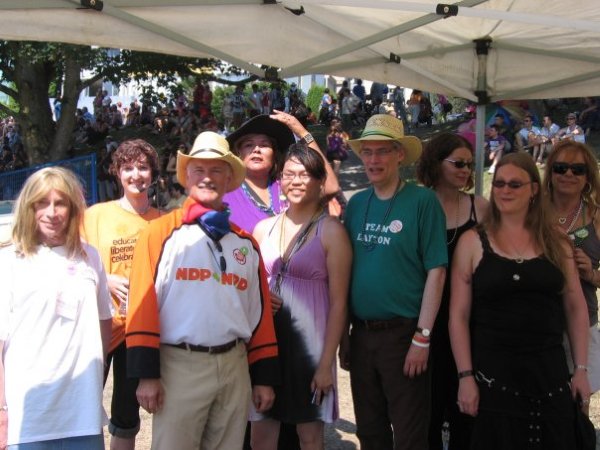 Needless to say, that presented the new chair (me) with a few problems! Going through the accumulated emails, including speaking invitations and Pride Parade and Festival business meant a busy week. But I got so much co-operation and help from people who had been around a while that it all happened. We missed out on a few things we could have done and were not as well organized about the ones we did get to as we could have been, but we did it!

The TAS delegation in the parade was smaller than it should have been but it did happen and so did the booth at the festival where we collected quite a few signatures in support of Bill Siksay's private members bill as well as a few membership requests.

My thanks to all those who helped out!

God! I look awful in this - but what do you expect after marching around the West End for hours?

I also went to the 'Moncada Day' celebration put on by the Canada Cuba Friendship Association. That was fun too - with really good food!

I met lots of people I knew - some of whom took a moment to recognize me - but no one seemed upset by the change.

I talked to the president of the Association who seemed to like my idea about sending hair removal equipment to CENESEX and also thought a panel on GBLT Rights in Cuba might be in order in the near future.

Well I did go to the Pastors for Peace send off party and had a good time. 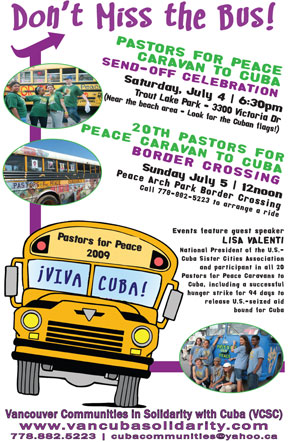 While Lisa Valenti (who participated in all of the Caravans to date) was speaking, I had an idea.

While I was at CENESEX, I'm pretty sure that I heard it mentioned that one service that was not available to Trans people there was hair removal. For those who don't know, many Male to Female Trans people consider this a psychological necessity and especially important for those who want to 'pass' in their chosen gender. Many also consider it a safety issue since it is so important in 'passing' and being 'outed' can be dangerous in many situations.

I'm pretty sure that the reason this service is unavailable is lack of facilities, so I approached Lisa after her speech with my idea - to send an electrolysis machine and/or a laser hair removal system to CENESEX with next year's caravan.

She liked the idea and so did everyone else I have suggested it to - for several reasons:

It would help provide a needed service to our Cuban sisters;

It would help to counter the propaganda about Cuba being hostile to the GBLT community;

It would raise the profile of the Trans community here in Canada;

And it would help to change the image of Pastors for Peace;

So as soon as things cool down from the recent excitement around TAS and Pride, I will be contacting CENESEX about this. If they say 'go for it' people should expect that I will be calling on people to help with this!