I apologize for taking this long to bring this up to date. Even though the last entry was posted in late June, it only brought things up to mid May. Sorry about that! Summer is a time for taking things easy, though. And I have been doing a bit of that (I'm going to have slightly different 'tan lines' this year!). It has also been a little slow on some fronts, as well.

I''ve been having some difficulty thinking of things to say about the few trans-political events that have happened. Several TAS meetings, of course - including some "Vision and Focus" meetings to see if we can come up with some new ideas about TAS and the type of organization it should be. If you want to keep up on those things, I would encourage you to go to the TAS website (http://www.transalliancesociety.org/) and join either or both of the Yahoo discussion groups. Last weekend was a bit of a change from summer relaxation, though. 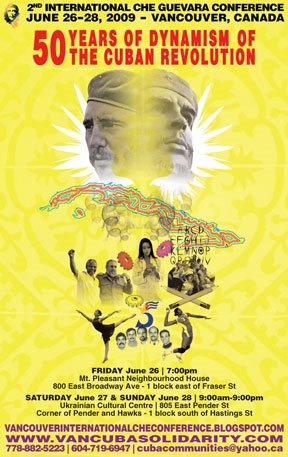 I went to the 2nd Annual Che Guevara Conference on Cuba. I had noticed that there was going to be a discussion about GBLT rights in Cuba and on CENESEX. Having been there so recently, I thought I would go along to see what people had to say and, perhaps, talk a bit about my own observations. It was interesting and even a bit fun to go to a non GBLT event for a change -- it's been a while. It was my first experience as 'Marie' using a microphone, but I think I did all right. I only spoke four times and my remarks were well received each time. I think I will have to start getting out to more events of this sort. I'll probably go to the "Pastors for Peace Caravan to Cuba" send off celebration tomorrow.I''m less sure about the Border Crossing event at Peace Arch Park on Sunday -- things are starting to get a little busy now. There is another TAS 'Vision' meeting on Monday with a short business meeting before it.

Just one humorous note about the Cuba conference. Among the attendees were a number of old comrades from way back when. I hadn't seen any of them for years. It was fun introducing myself to them and watching their faces when they realized who I was. One of them didn't figure it out at all, even after I had spoken three times and was chatting with him, he just had this "don't I know you from somewhere" look on his face. I finally took pity on him and explained.