Well, I mentioned' in the last post, that I was going to visit CENESEX in Havana. I did.

I was in Cuba from April 25 to May 8. Not quite believing what I was told by the tour organizer (that I would be fine as Marie on the streets of Havana), I only brought a pair of jeans and two blouses with me - mistake.

First thing in the morning on April 28, our group went to CENESEX And had a long meeting with one of the psychologists. No one: hotel staff, other guests, fellow travelers, bus driver, translator, or any of the staff at CENESEX had any reaction to my presence among them (except the occasional compliment).

As I expected, the discussion at the meeting went all over the map. Many of the others in the group didn't seem to realize what the mandate of CENESEX was and asked questions relating to all kinds of other issues. (I have much of that meeting on video, if anyone is ever sufficiently bored!) However my appearance, and my credentials as a trade unionist and a member of the steering committee of the Trans Alliance Society (TAS), did get me an invitation to come back after the rest of the group had returned to North America.

For the rest of day, I carried on with the tour. Lunch at a nice restaurant, (where I used the Women's washroom - with no complaint by either the management or other patrons), the art gallery (joining a tour being led by a flamboyantly gay guide), and finally, with just a couple of friends some shopping at the crafts market in old Havana where I bought some nice jewelry. Back to the hotel and a shower, then a quick supper. Such was my first day - as Marie - in Havana.

As I said, I had foolishly brought only a small wardrobe, so it was back to 'DRAB' (Dressed As a Boy) for the rest of the official tour including Mayday. I had thought that we would march to the Office of American Interests on Mayday - a rather long walk as I recall from Mayday 2001 - so I didn't present as Marie for that. Much as I would have liked to. The boots I had brought were just not made for that kind of walking! As we didn't - the demonstration stayed in the area around the Plaza of the Revolution (perhaps to give Obama some political space to do the right thing) - I was kicking myself when it was over. To be trans on Mayday in Havana would have been a dream come true!

The following Tuesday, having moved from hotel to the apartment my friend and I had rented, it was back to CENESEX, by cab this time. I had found a translator since I was sure that my Spanish would not be good enough for the interview with the deputy director. It turned out that Teresa was a lesbian and knew quite a few people in the GBLT community in Havana - including some of the people who worked at CENESEX.

The interview went well, although I was requested not to record it on video. CENESEX, and Cuba, are using essentially the protocols laid down by the World Professional Association for Transgender Health - the same as are applied in British Columbia. Not a big surprise there - a world class medical system using world standards.

A few things the deputy director said did jar with me, though. She seemed to be somewhat stuck in a 'binary' gender model and the things I had asked Teresa to tell her about myself seemed to confuse her. During a break in the 'formal interview', when we got a little off topic and chatted about me, she wondered if I was a 'lesbian trapped in a male body'! I told her that was not quite true, but closer to the mark than some North American psychologists would come, she was relieved and confused at the same time.

Well, time was pressing, CENESEX runs a drop-in centre for trans people in Havana rather like the ones I go to on Thursdays in Vancouver except theirs meet on Tuesdays. I could see the people gathering on the veranda and she eventually asked to be excused since she was the facilitator for the group. As I had gotten answers to pretty well all of the questions I had, I agreed to end the interview - with the request that I be introduced to the group. She enthusiatically agreed to this and introduced me to about 15 to 20 'Male to Female' trans people to whom I said a few words about how things were progressing in Canada.

One of the people gathered, however, was not to be put off with just that much. It turned out that Angelie, who worked as a cleaner at CENESEX - having gotten off 'the streets' by having that job - knew Teresa 'from the community'. She slipped away from the group for a moment, before we left and invited us to go to a drag show at a gay club on Thursday so we could talk some more.

More on Angelie and the drag show next time...

When we got back to central Havana I took Teresa to the 'Patio Bar' at the Habana Libre hotel (normally out of her price range - but across the street from my apartment) to chat about events and the invitation.

Needless to say, the Patio Bar was not out of my price league and my friend and I had been there many times - often enough that one waitress recognized us and usually brought our drinks without our having to order. This time I had to flag her down, though. When she got close enough to see my face clearly and heard my voice as I ordered, she said (freely translating), "Oh! It's you! Right away, sir - I mean, madam!"

So much for trans/homo-phobia in Havana! 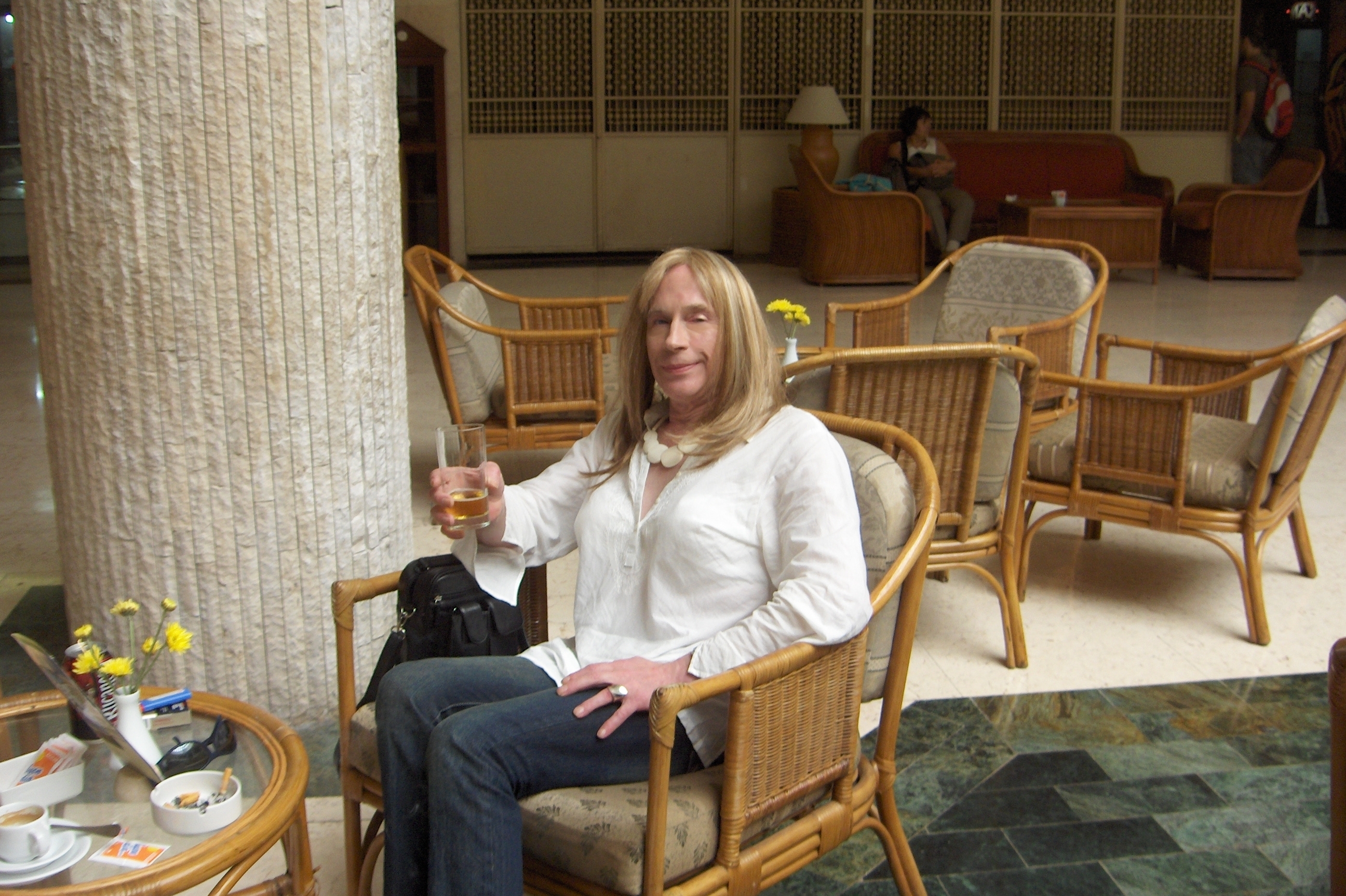 The photo was taken by Teresa in the 'Patio Bar' at the Habana LIbre - ring and necklace courtesy of the artisans at the 'craft market'.

A night out in Havana

As I said in the last entry, Angelie invited us to go with her to a gay club the following Thursday.

She came to our apartment Thursday afternoon - earlier than expected. My friend was having a nap and I wasn't ready yet. I wanted to look my best for 'clubbing' in Havana, after all.

So I made her a coffee and we chatted while I dressed and did my make up. Teresa arrived a half hour or so later and my friend finally appeared - well rested.

Off we went to have dinner at a 'private restaurant' that Teresa recommended. My friend and I had intended to check out one of these anyway - just to see what they were like and how they compared with the more usual run of Cuban restaurants.

We must have seemed an odd group to the Cubans on the street! Two obvious foreigners - one cross-dressed, one Cuban woman - appearing somewhat 'butch' and one fairly obvious transsexual (I should mention that Angelie is about 6 feet tall and, since we were going 'clubbing', had chosen to dress a bit provocatively, including heels). But our appearance didn't deter a cab from picking us up and we were soon entering the restaurant which was on the second floor of a converted house. As far as I could see the only excitement that our arrival caused was the presence in the group of two foreigners which, I'm sure, the hostess and waitress interpreted as meaning bigger tips.

The restaurant itself was nicely decorated and the staff were, perhaps, a little - but not much - more attentive than at most of the restaurants I had visited this trip. The food was good and, perhaps, marginally better prepared. In general my judgement is that the small difference in quality was not worth the substantially higher prices. Still a worthwhile experience - especially to see the response of the staff and other patrons to us. They would not be subject to the same 'discipline' as the people at a government owned establishment. 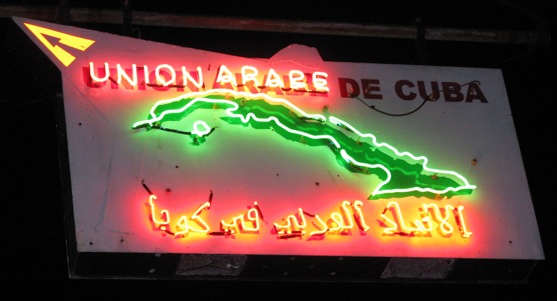 Another cab ride to the "Union Arabe", as the neon sign outside (half in arabic), still proclaimed it to be. Quite a large - and very mixed - group waiting outside but Angelie's status as a 'regular' soon got us in.

The patrons were a very mixed group, mostly gay men but perhaps a quarter were Male to Female trans people, with a few women as well. I think my friend and I were the only North Americans there, but I did meet a Spaniard out in the hall while having a cigarette. Unusually for a Cuban club, smoking was confined to the hall outside.

The show was 'interesting', a few of the performers were quite convincing and talented. Others less so. Unfortunately the person being 'showcased' fit into the latter category and probably only got top billing on account of her wardrobe which was elaborate and extensive - I lost track of how many outfits she wore in the course of the evening. She introduced her dressmaker part way through the show - that may have been the point of the reason for the exercise. I noticed that quite a few people sat at his table for brief periods of time during the rest of the evening. Placing orders, perhaps?

By 3:00 AM the show being over and dancing having started, we took our leave.

There was not a cab in sight, but Teresa managed to talk someone who was going (more or less) in our direction to give us a ride. This is common in Cuba where cars are not as common as here. Foreigners are not usually included in this phenomenon since they are assumed to have the money for a taxi. For a small 'gratuity', the driver actually went quite a bit out of his way to not only take us right to the door of our apartment building but to drop Angelie off on the Malecon (the street that follows the sea wall where a lot of Cubans go to walk and socialize, at all hours). The Malecon is especially favoured by the GBLT community in Havana.

As we were driving along the Malecon towards where Angelie thought some friends of hers might be, I noticed the number of transgender people among those walking. It was astonishing! There were quite a few police in evidence as well, but there didn't appear to be any confrontation happening and it is normal for there to be a lot of police in that area - near the 'Office of American Interests'. In any case, the police presence didn't seem to bother Angelie who saw some of her friends and asked to be let out nearby.

Back to our apartment to load Teresa down with a few gifts - the remains of the coffee, etc. that we had bought for our kitchen, a T shirt and a few other tokens. Then off to bed to get ready for the flight home the next day.

So ended my last full day in Havana. Leaving me with the impression that I was going to have to bring a much more varied wardrobe with me the next time! And that, whatever MAY have been the case in the past, Cuba now, does NOT deserve the reputation that has been fostered by the North American media as unfriendly to gay and trans people. And with the people at CENESEX continuing to do the work that they are doing, it will probably be even more friendly by the time I return. And I will return!